For new homeowners Ze Feng and Yoby, it was almost impossible to find a designer who was willing to bring their ideas to life; they needed a skilled designer who could make their challenging ideas work.

Thankfully, Space Atelier stepped up to the plate and delivered a smashing job for their 3-bedroom condo – we find out more about the couple’s renovation journey. 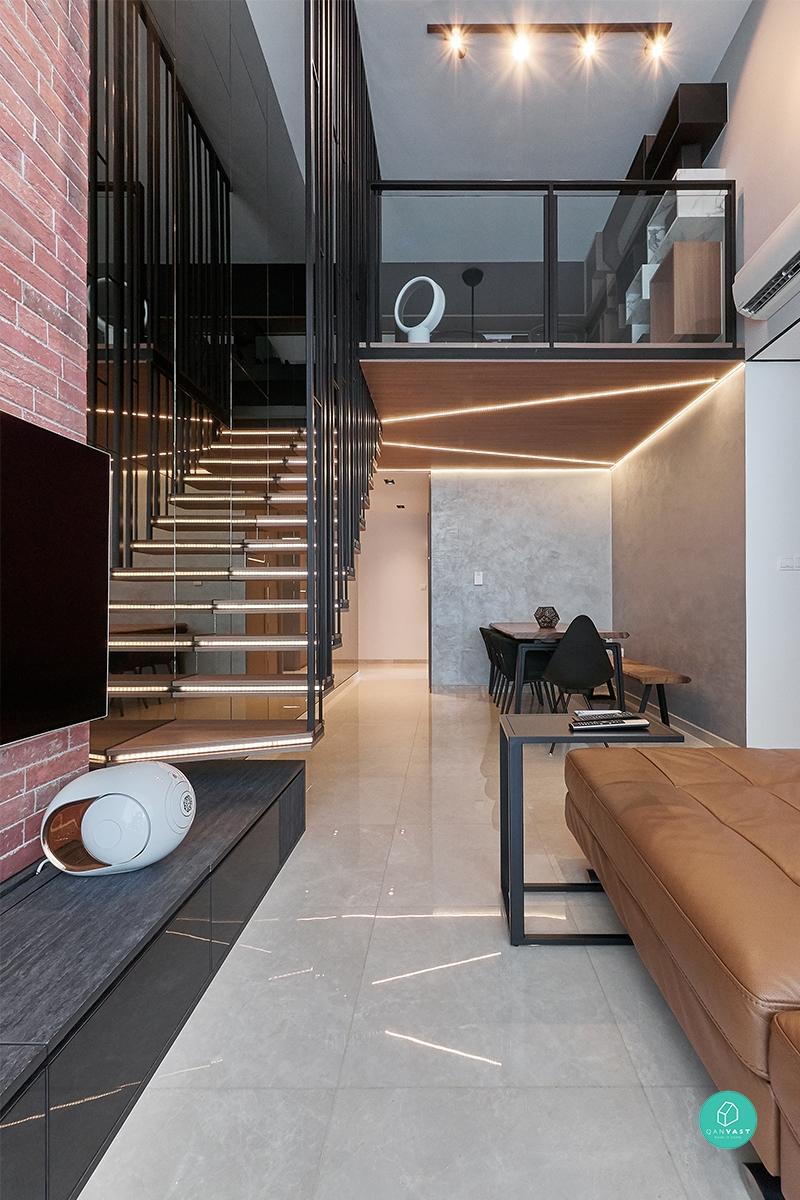 Why did you engage Space Atelier?

Yobe (Y): Out of all the IDs we met, Space Atelier Design Associate is the most knowledgeable and he could answer all our queries. We wanted to build a loft, which we knew would be challenging, given the size and weight restrictions, and the design we had in mind, but he managed to give us solutions and even gave us a quotation that was very reasonable as compared to the other IDs. 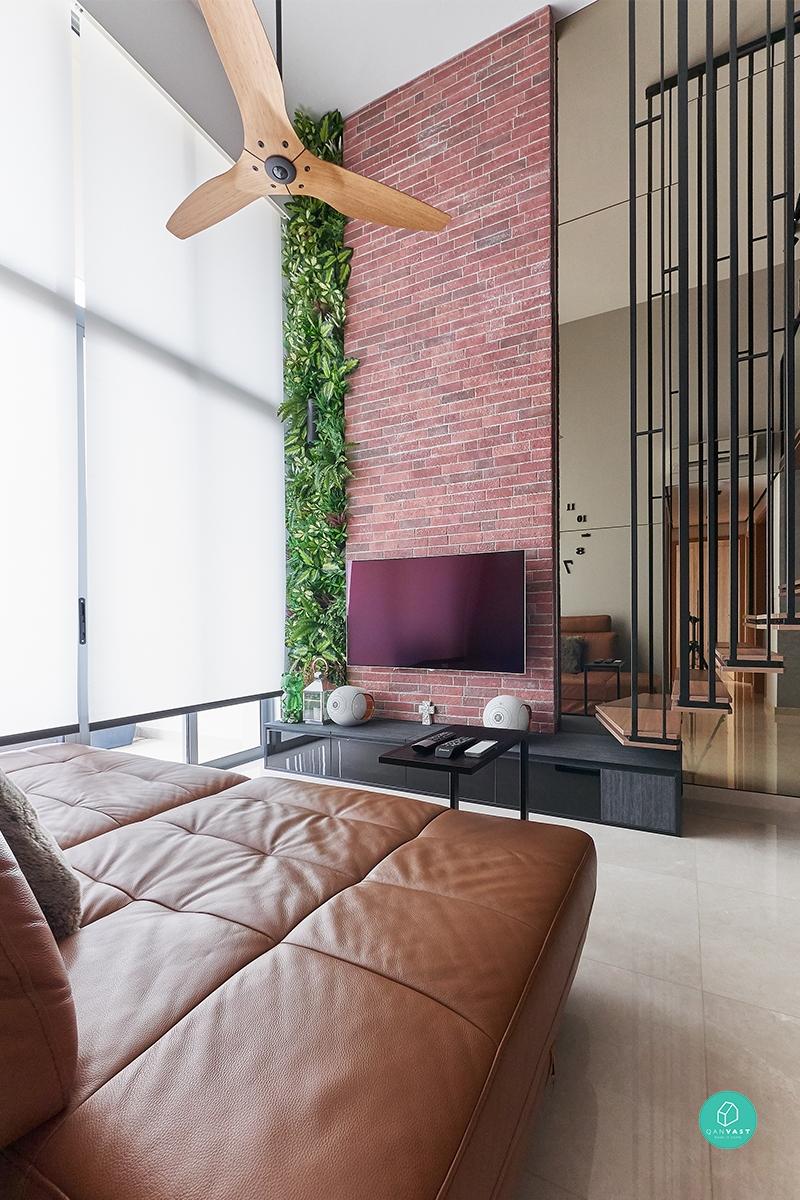 Another major factor was that he was the only ID that told us he could execute the design that we had in mind. We wanted a mirror wall, but with the loft’s staircase also flushed against the wall, it was a tricky task as the mirrors were likely to crack during fabrication or installation.

He was able to do a lot of research and get back to us on what could or could not be done. He showed us the various types of mirrors that could be used, as well as how it could be done. 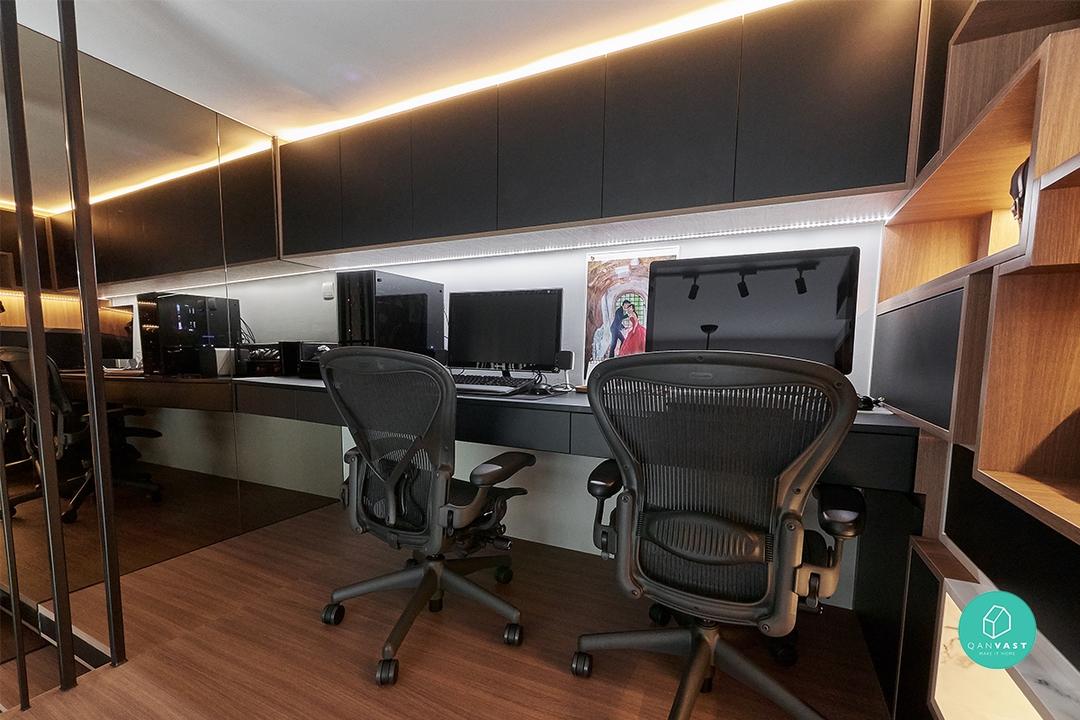 Y: It was a very painless process – you just tell him what you need, and he gets everything done for you. He doesn’t charge any hidden costs and he would try to compromise if any crops up.

Before the renovation, we met with him almost every week. He would provide us with updates of the renovation’s progress, and was also very nice about some last minute changes. For example, he helped us to change the laminate on our desks at no charge.

He also advised us on choosing the right materials and colours, and even sourced for our furniture for us. 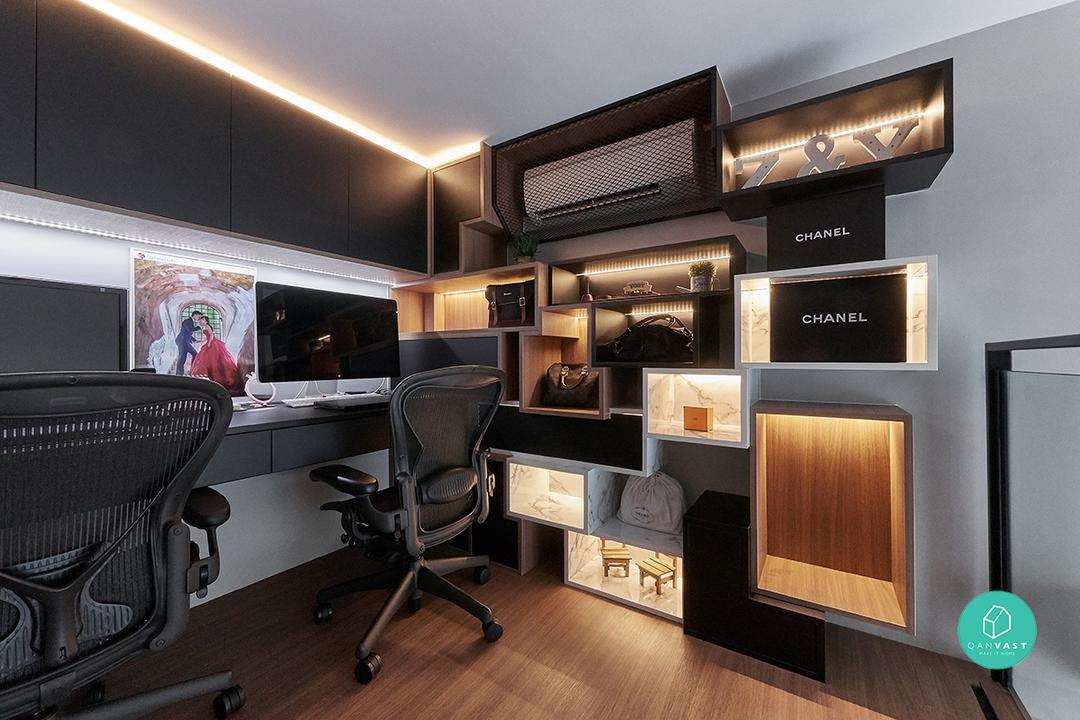 What was your brief to Vans?

Y: For the loft, we told him we needed a place to display my bags. Something not so dull, or ‘neat’, so he proposed shelves of different sizes and depths.

We also needed a place that would be able to fit in two big monitors. We couldn’t decide where to place them for a good view, so he gave us lot of ideas and went through a list of pros and cons for each orientation. For example, if we fit our table there, we can have a smaller or bigger display cabinet.

We had some requirements in the master bedroom too. We tore down the wardrobe that the condo came with and rebuilt it. We wanted a design that could camouflage the toilet door – when you close it, you can’t tell it’s a door, it just looks like part of the wardrobe! 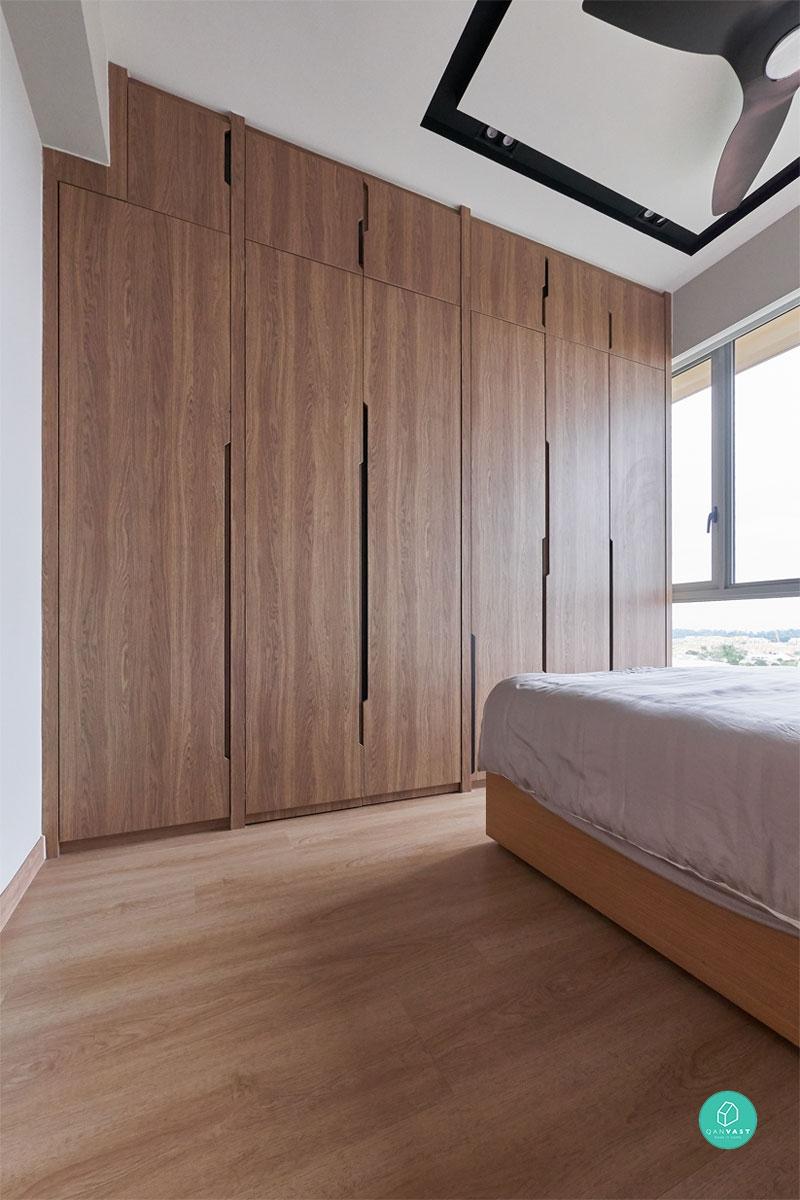 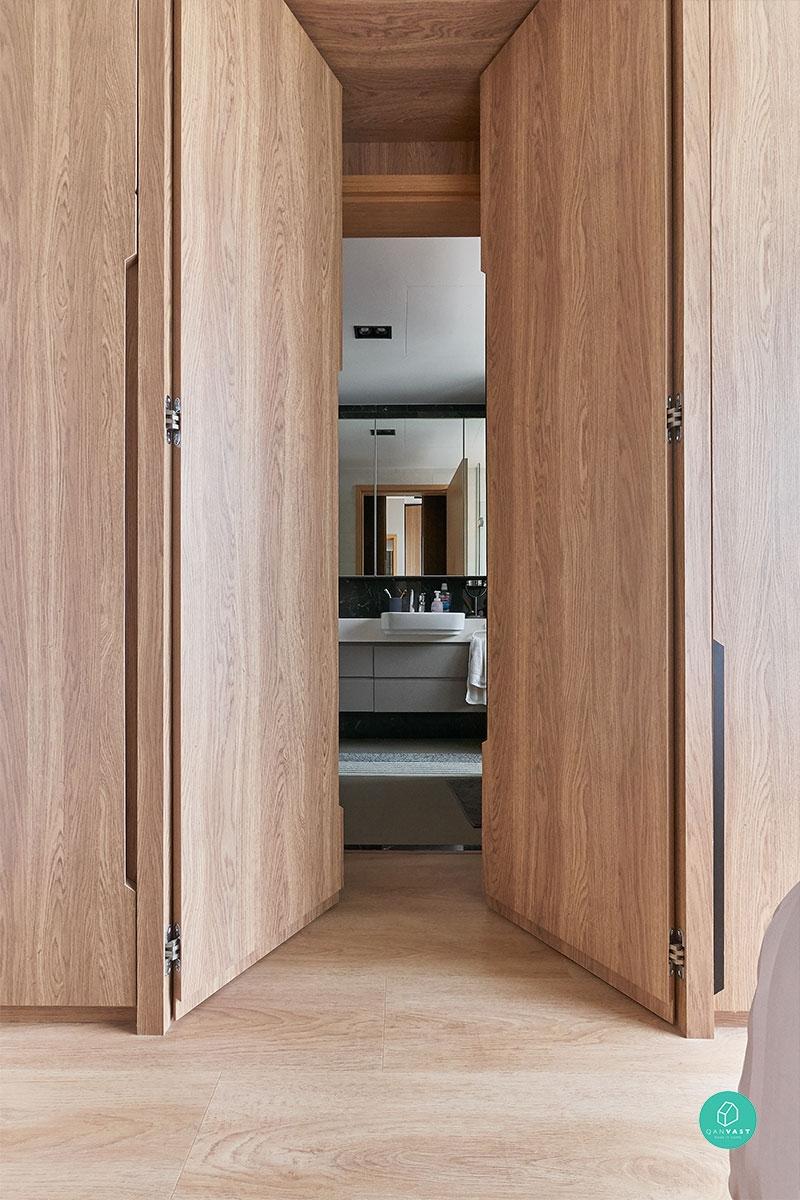 Y: Definitely the mirror wall. First of all, the living room is very small, so we wanted a mirror to make it look bigger. Secondly, we don’t have a full length mirror – not even in the bedroom – so we wanted it somewhere where it would be easy to for us to take a look at ourselves before we go out. 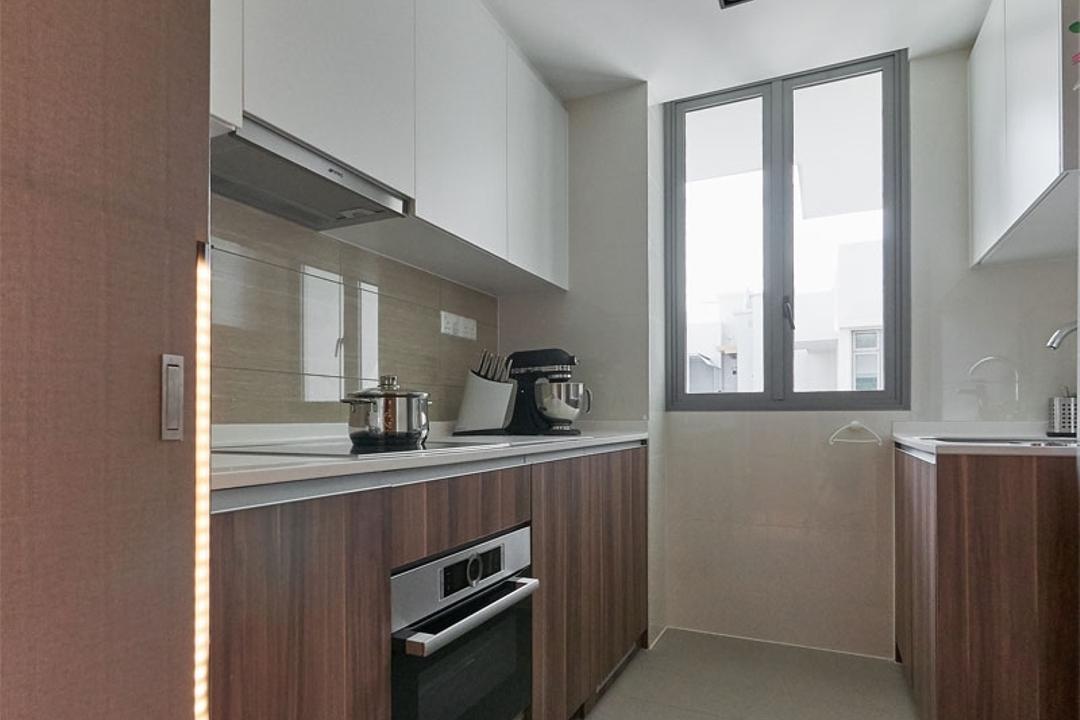 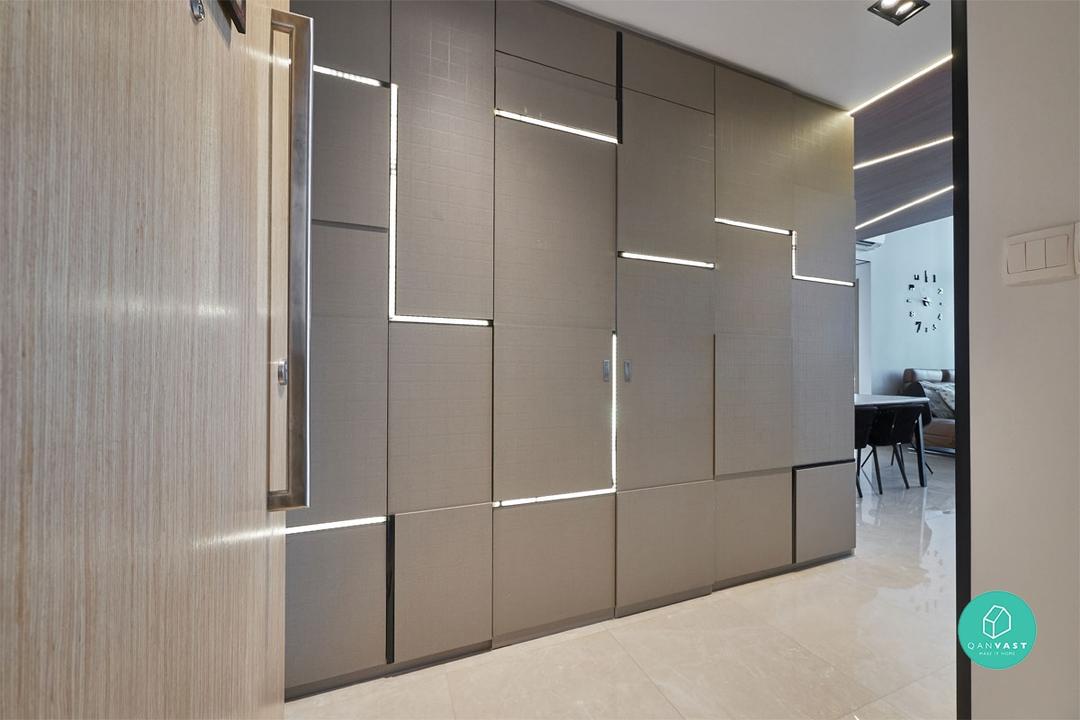 One thing you would have done differently, in retrospect:

Y: I would not do the stucco wall at the dining area. We had painters who came over to do it. I kind of regret doing that, because when people sit at the dining area, they tend to lean back or brush against the wall, so there are scratches. If you want to do it, I would recommend doing it on a wall that people aren’t going to touch.

Do you have any enquiry?

Send us an enquiry! Let’s change ideas about what you want for your space.